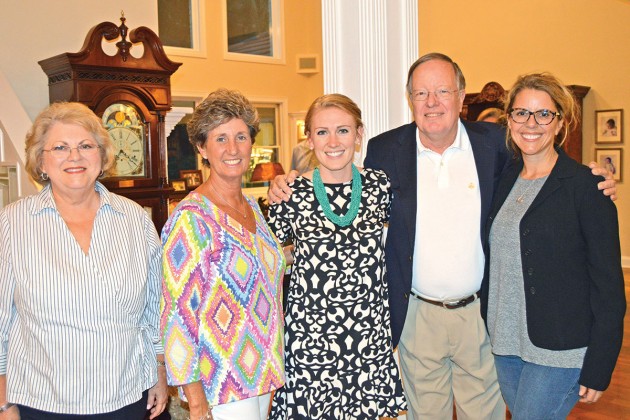 September 1, 2018
Published by The Resident News
By: Editor

It was a chance to learn about a new transportation proposal as well as to get to know each other better when board members from the San Marco Preservation Society and the San Marco Merchants Association gathered at the Epping Forest home of SMMA President Robert Harris and his wife, Paola, for barbecue Aug. 2.

During the event, Harris introduced Billy Chenoweth, owner of Beachside Buggies, and asked him to make a 20-minute presentation about his business and how it might be the answer both organizations are seeking to alleviate parking and transportation problems in San Marco.

By running environmentally-friendly, zero-emission, long-range, eight-to-10-seat electrical carts and 14-seat passenger vans, Chenoweth, who operates his transportation service at the Beaches, is in negotiations with SMMA to provide a similar service of free rides to residents and visitors within the San Marco community between the hours of 10 a.m. and 10 p.m. Like Uber or Lyft, riders contact his service through a computer app.

“Our app is similar to Uber’s, but when you show up on the map all the drivers can see it and see where everyone is going. Unlike Uber, which is one person to Point A from Point B, we pick up many riders and may drop them off along the way,” Chenoweth said. “We can move so many people with not that many vehicles. When you order a ride from us you can see it on our app. You can see it driving around as it comes right to you.”

When he first started his business in Jacksonville Beach, Chenoweth assumed he would primarily ferry guests at the hotels, but once it started he quickly realized 80 percent of his ridership was residential. “It happened overnight. It was so quick to catch on,” he said.

Chenoweth’s buggies are paid for by signs advertising local businesses, which are attached to his vehicles, and through tips to the drivers. The service also serves as a “concierge,” recommending to its riders restaurants, shops, and hotels that advertise, he said.

During Phase I, the buggies would service the area from River Oaks Road to the Southbank, he said. If successful, the service would extend its territory to Miramar Plaza and, later, further south.

“The idea is that instead of local government paying for this or sponsoring a local program that lasts only one or two years, we have something that can last a lifetime and grow with the city,” he said, adding that in San Marco it would be his goal to raise $2,500 in advertising per month per vehicle, which would be split among several advertisers.

Because a lack of parking and a desire to find a way to attract more people to San Marco Square have been constant issues facing his board, Harris said SMMA had been consulting with Baptist MD Anderson and JTA on a possible solution. Both the hospital system and JTA have expressed their support for whatever SMMA comes up with, he said.

After listening to Chenoweth’s presentation, feedback from SMMA and SMPS Board members was positive, although Harris admitted there are some “small challenges” facing the plan, including where to store the carts and passenger vans at night and whether SMPS would agree that they fit in San Marco’s historic community.

“I love the idea,” said Bryan Mickler, president of SMPS, noting it would help prevent drinking and driving. “This is the first I’ve heard of it, but we would all like to zoom around San Marco, and if this helps the businesses, it helps us all.”