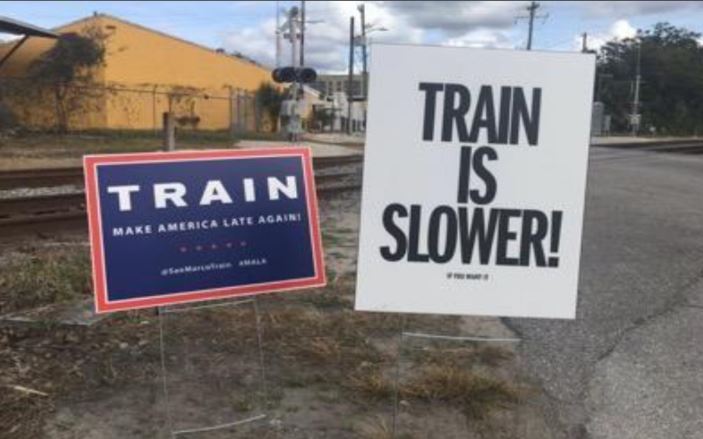 This past week, word was received that Jacksonville was successful in securing a $17 million federal Consolidated Rail Infrastructure and Safety Improvements (CRISI) grant.

This grant funds improvements that will help eliminate the slow-downs FEC train traffic causes in San Marco by reducing rail line congestion. The improvements will allow the trains to “continuously move through the San Marco neighborhood and over the St. Johns River rail bridge without stopping and blocking grade crossings,” according to the grant application.

These efforts were begun under District 5 Councilwoman-elect and SMPS past-president LeAnna Cumber’s leadership. LeAnna worked tirelessly to bring the railroads (such as FEC and CSX) together to come up with a solution.

The San Marco Preservation Society thanks Member-Elect Cumber, the City, JTA, CSX, FEC, the Florida DOT, and all other contributors for their efforts in securing this grant.

On its satirical Twitter account, the San Marco Train itself even chimed in on the grant award by replying to Mayor Curry, joking: “We assume this money is going to louder whistles and longer trains?”

Click here to read the Florida Times-Union article about the project.