The San Marco Preservation Society (SMPS) is pleased to announce the recognition of board member Chris Woolston by First Coast News for their “12 Who Care” program.

The “12 Who Care” awards were launched by First Coast News several years in attempt to highlight “unsung heroes” who go above and beyond making a difference in the lives of others. Each month of the year, they recognize a different honoree from the First Coast area.

Chris Woolston and his wife Ashley are decade-long residents of San Marco.

Chris is an educator and helped create a speaker series at the elementary school at which he works. He also co-created a free monthly literacy event called Story Time in the Square, open to kids of all ages on the first Saturday of each month under the gazebo in San Marco Square.

He is also a passionate photographer, donating his photography skills to local organizations such as the Douglas Anderson School of the Arts theatre program and San Marco-area Crucible CrossFit gym, even photographing friends’ weddings free of charge.

In addition, Chis is an avid runner. He has participated in the Gate River Run six times and placed in the Top 10% at the 2022 race, as well as placed second in his age group at the most recent Children’s Miracle Network Festival of Lights 5K.

The SMPS was founded by neighbors to maintain the integrity and charm of historic San Marco, and for more than 45 years, has remained a volunteer-run organization. It’s governed by a board of directors, of which Chris has been a member for more than seven years. He has served in multiple chair positions, as the 2020-2021 Board President, has chaired multiple annual fundraiser events, and perhaps most notably, is often the first board member to offer assistance on projects.

Chris is one of the best spirited and most selfless board members the SMPS has ever boasted. Chris Woolston brings passion and energy to each of his roles and has made remarkable and measurable contributions to his school, the SMPS, education, and our community with his leadership and thoughtfulness. The SMPS is proud of Chris and the work he does in and for his community, and congratulates him on this much deserved “12 Who Care” recognition. 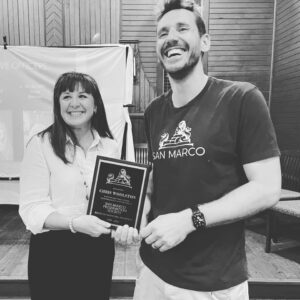 To read the full “12 Who Care” nomination, click here.